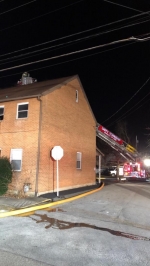 At 4:00 AM on Tuesday, December 11th PUVFD was activated to assist with a structure fire 203 Main St, in Youngstown's response area. Tower/Ladder 36 arrived on scene and firefighters placed groun...
Read more »
Smoke in the Structure Call in Pleasant Unity Response Area
Sat. Dec 8th 2018
At 10:54 pm PUVFD was activated for a call of smoke in the structure at 1903 Route 130. After arriving on scene firefighters found some smoldering in the basement ceiling below the first floor firepla...
Read more »
Chimney Fire/House Fire in Chestnut Ridge Response Area
Tue. Nov 20th 2018 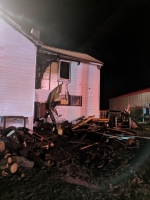 PUVFD was activated at 1:17 AM early Christmas morning to assist Lloydsville VFD with a house fire on Glacier Court in the Wimmerton area of Unity Township. An officer from Lloydsville VFD was on sce...
Read more »
Trailer Fire Assist in Marguerite VFD Fire District
Thu. Dec 22nd 2016 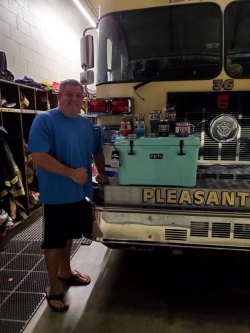 In an effort to raise some much needed funds for the Pleasant Unity Volunteer Fire Department our members hosted our first "hybrid" drive-through/online raffle at the station this evening. ...
Read more »
Fire Trucks Disinfected
Mon. Apr 20th 2020 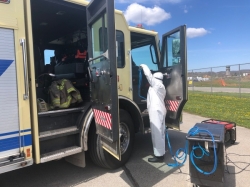 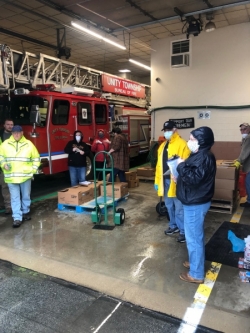 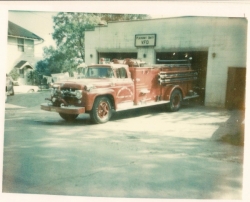 The PUVFD Spring Sportsmen's Bash is being held this Saturday, March 7, 2020 from 5 to 9 PM. It appears that all tickets for the event are sold out at this time. If you would like to attend and ...
Read more »
About Us

The Pleasant Unity VFD was organized in 1917 shortly after the "Big Fire" that destroyed more than a dozen buildings in both residential and business district of the town. The fire started in the Novis Clothing store on Church Street and consumed 2 bakerys, a barber shop, butcher shop, hardware store, grocery store, warehouse, odd fellow building, jewelry store and the PU branch of Red Cross. The fire was stopped 4 hours later by miners who used dynamite to blow up a house which stopped the blaze from spreading further. 12 families were left homeless and another 7 homes were made uninhabitable by the fire. Extinguishers brought from Latrobe were no match for the fire and a chemical truck sent from Greensburg broke down on its way.

The 1st fire equipment consisted of two 30 gallon chemical tanks drawn by hand. Later, the chemical tanks were mounted on a model T Ford which was bought by the department. In 1940, a 500 gallon American LaFrance Fire Truck was purchased then in 1943 a Dodge truck was bought and a 250 gallon portable pump was mounted to it. A Ford F-6 500 GPM pumper with 300 Gallons of water was built in 1952 by the Howe Fire Apparatus Company for the PUVFD. In 1957 a Ford F-9 Pumper Tanker was purchased from American Fire Apparatus Co. A squad truck was purchased in 1967 and later sold in 1974. In 1973, a used 1959 John Bean high pressure fog truck was purchased from the Monesson Fire Department and later used as a rescue truck. In 1976, a Ford 1000 GPM pumper built by Emergency One Fire Equipment Company with 750 Gallons of water was put in service. In 1991, a Mack rescue truck was built for PUVFD also by the Emergency One Fire Equipment Company.  In 1999, PUVFD combined the 1991 rescue truck and the 1976 pumper into a 1999 Ferrara combination rescue/pumper truck.  PUVFD also housed and operated two former aerial trucks owned by the Unity Township Fire Bureau, a 1963 Mack Maxim 85 foot ladder formerly owned by Massapequa Long Island, NY and a 1977 Kenworth 85 foot LTI tower ladder formerly owned by Garden City Park, NJ Fire Company.

Pleasant Unity Volunteer Fire Department celebrated 100 years of service in 2017 by hosting the Westmoreland County Firemen's Association annual convention in conjunction with commemorating 100 years of PUVFD firefighters who served over the years.  PUVFD continues it's legacy with 100% ALL VOLUNTEER membership. 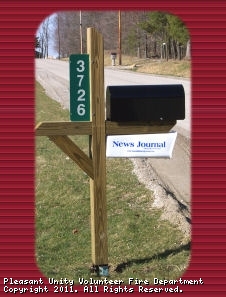 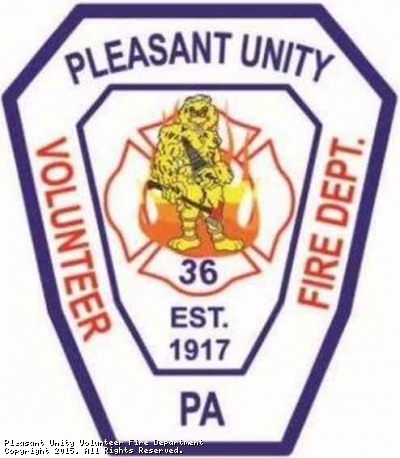 Any prospective Junior Firefighter or their parents who have any questions may contact Chief John Bacha at chief@puvfd.org.

Tweet
Copyright © 2006-2021. YourFirstDue Inc. All Rights Reserved. Designated trademarks and brands are the property of their respective owners. Content on this web site is supplied by Pleasant Unity Volunteer Fire Department. YourFirstDue Inc. cannot be held responsible or liable for any content, text, pictures, or any other media found on this web site. Maintained by the members and staff of Pleasant Unity Volunteer Fire Department.
Management Login
Powered by